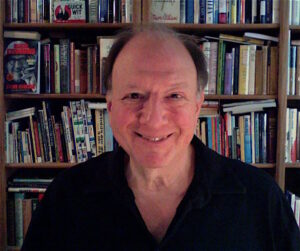 Steve Stoliar has been a professional writer for nearly 40 years, providing material for Dick Cavett as well as penning episodes of such television series as Murder, She Wrote, Simon & Simon, The New WKRP in Cincinnati, Legend and Sliders. He has been a consultant on a number of books and documentaries about Groucho and his various siblings. He has also written and produced documentaries on such diverse personages as John Lennon, The Marx Brothers, Elvis Presley, Shemp Howard and Dr. Martin Luther King, Jr. Additionally, he has provided voices for various animated specials including Frosty Returns, The Oz Kids, You’re In The Super Bowl Charlie Brown and Snoopy’s Reunion. Born in St. Louis, he now makes his home in Studio City, California.

In 2012, BearManor Media published an expanded version of Mr. Stoliar’s 1996 memoir, RAISED EYEBROWS: MY YEARS INSIDE GROUCHO’S HOUSE. This bittersweet autobiography chronicles the last three years in the life of this comedy icon, as seen through the eyes of Mr. Stoliar, who was Groucho’s personal secretary and archivist while attending UCLA.

In February of 2022, Cold Iron Pictures announced that they were going to produce a film version of RAISED EYEBROWS starring Geoffrey Rush as Groucho Marx, Sienna Miller as Erin Fleming, and Charlie Plummer as young Steve Stoliar. Oren Moverman will direct, from a screenplay co-written by Moverman and Mr. Stoliar.

In 2022, Mr. Stoliar edited and provided commentary for the book Salamis & Swastikas: Letters Home From A G.I. Jew – a remarkable collection of letters written by his father, Staff Sgt. David E. Stoliar, to his wife and baby daughter in St. Louis during World War II, from North Africa, Italy, France, Germany, and England. The letters run the gamut from vivid war reportage to insightful analysis of anti-Semitism in Germany (as well as in the U.S.) to heartwarming adventures with his dog to heartbreaking reminders of how much he sorely misses his family to thumbnail reviews of then-current movies and songs, all filtered through the prism of a secular Jew caught in the middle of war against the Nazis.

Additionally, there are dozens of never-before-seen personal photos that bring to life the colorful people, places, and events that Sgt. Stoliar writes about in his richly detailed letters.