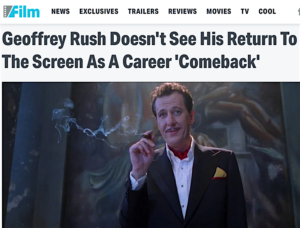 While waiting for the rest of the ducks (whyaduck?) to line up for the film version of RAISED EYEBROWS, I have been accepted for representation in commercials and voice-overs by Commercial Talent Agency in Studio City. (I’m also available for film and TV, but they don’t represent me for those….) Here are the three images they selected for inclusion on the main casting websites.

At a recent film festival where his body of work was celebrated, Geoffrey Rush took time to make a few comments about the challenge of playing GROUCHO in RAISED EYEBROWS, which we expect to be in production in 2023!
https://variety.com/2022/film/global/geoffrey-rush-groucho-marx-captain-barbossa-1235310808/

Here’s the latest news about the RAISED EYEBROWS movie. We expect to start filming in 2023.

Here’s a podcast/webinar I recently did for the National Museum of American Jewish Military History in which I discuss my book, SALAMIS & SWASTIKAS: Letters Home From A G.I. Jew.. I also read generous portions of some of my father’s wartime letters, show some of the remarkable photos from the book, present a brief video interview with my father about his wartime travels, and answer a few questions.

I now have copies on hand of SALAMIS & SWASTIKAS: LETTERS HOME FROM A G.I. JEW that I would be happy to sign or personalize for you! Click on the SHOP page and follow the instructions – and don’t forget to indicate if you want it signed to someone in particular. (It’s also available on Amazon in Kindle format.)

It was recently announced that Cold Iron Pictures will be producing a film version of RAISED EYEBROWS starring Geoffrey Rush as Groucho, Sienna Miller as Erin Fleming, and Charlie Plummer as…..young Steve Stoliar! I co-wrote the screenplay, along with Oren Moverman, who is also the director. Click on the link and read all about it!
https://deadline.com/2022/02/geoffrey-rush-sienna-miller-groucho-marx-raised-eyebrows-1234924162/

SALAMIS & SWASTIKAS: LETTERS HOME FROM A G.I. JEW is a remarkable collection of letters written by my father, Staff Sgt. David E. Stoliar, to my mother and sister in St. Louis during World War II, from North Africa, Italy, France, Germany, and England.

The letters run the gamut from vivid war reportage to insightful analysis of anti-Semitism in Germany (as well as in the U.S.) to heartwarming adventures with his dog to heartbreaking reminders of how much he sorely misses his family to thumbnail reviews of then-current movies and songs, all filtered through the prism of a secular Jew caught in the middle of war against the Nazis.

Additionally, there are dozens of never-before-seen personal photos that bring to life the colorful people, places, and events that my dad writes about in his elaborately detailed letters. (More photos from the book on the Gallery page.)

“Steve Stoliar’s book is a richly satisfying read. The book’s heart is a priceless –  and, fortunately, preserved –  collection of his soldier father’s personal letters home from World War II. A rare, moving, colorful, and intimate look at war from inside the beast. A book to remember.”

“I found the book very entertaining, full of good stuff, sad as can be, and eye-opening as to what it was like to be shipped thousands of miles from one’s wife and child and to have to fight missing them, which, for me, would be as hard as fighting Germans. I couldn’t have lived through what the author of these letters lived through. Great fun to read, but also heartbreaking.”

“Just one G.I’s pen to paper and what a revelation! Staff Sgt. David Stoliar’s letters home are dense with humor, love, the right amount of army scuttlebutt, and soulful musings of a young American-Jewish soldier in the war against Hitler. I’m grateful to Steve for making his dad’s World War II story an important addition to the historical record.“

“These humorous and heartbreaking letters home from World War II are a wonder. They not only paint a portrait of the fight and the human face of war, but more importantly, we feel the incredible love for wife and family, which is why we were fighting. Endearing. Moving. Unforgettable.“

– STEPHEN TOBOLOWSKY (Actor/Author of MY ADVENTURES WITH GOD)

Here’s an enjoyable episode of the “Hi, I’m Jason!” podcast, with host Jason Pollock, in which I discuss my Groucho years and other aspects of my life and career.