Terry Motley (of Motley P.R.) just produced this nifty promo touting my REMEMBERING GROUCHO one-man show (and yes, that’s my voice in the video). Hopefully, it will lead to being booked at various colleges, clubs, companies, organizations, theatres, etc. hither and yon, so that I can share my Groucho stories and previously unseen home video of Groucho and me with people who will appreciate it.
http://vsrv.us/sv48/?id=16475

Rob Zombie talks about post-production on his latest horror film, 31, and then discusses how the RAISED EYEBROWS movie project came to be and his take on the story.

I recently had the pleasure of appearing on Chicago’s “Dave & Dave” radio show, along with hosts Dave Weiser and Dave Niven (hence the name). Although they don’t archive their broadcasts once they’ve aired, they were fool…er…kind enough to share the file with me so’s I can share the show with you kindly-type folks. So here I am, yammering on about working for Groucho, writing RAISED EYEBROWS, how Rob Zombie and I got together, and hypothesizing about the upcoming filmic version of said memoir.

Forty-one years after “The Committee for the Rerelease of ‘Animal Crackers'” makes headlines in UCLA’s Daily Bruin, I’m back in the Bruin again!

Here’s an exclusive interview with Mr. Zombie that gets into the importance of “RAISED EYEBROWS: The Movie” in terms of his career – ‘n’ stuff.  Interesting reading!

For those who may be wondering how I crossed paths with the likes of Rob Zombie and ended up handing over the reins to my very personal story, I have penned this essay, which just appeared in the online edition of The Hollywood Reporter. I originally entitled it I Walked (And Talked) With A Zombie, but the editor explained that they had to go with a title whose key words would trigger the randomly generated algorithms or self-hating logarithms or some sort of newfangled whatchamacallits. At any rate, it’s a fuller explanation of how the RAISED EYEBROWS movie project came to be and why this may not be as outrageous an idea as it might seem.

Here’s a different kind of animated promo for RAISED EYEBROWS – called “whiteboard animation” – also done by that talented fellow Terry Motley at motleypr.com. I think it’s pretty nifty (but then I would).

Terry Motley of motleypr.com made this terrific 23-second animated promo about RAISED EYEBROWS – and the news that it’s going to be made into a film!  In addition to being able to order the Kindle and Audio versions of my book on Amazon, you can always click on my SHOP page and order a signed or personalized copy of the newly revised and expanded paperback version!

Here’s a Skype interview I recently did for “The Junot Files.” In it, I discuss the upcoming film version of RAISED EYEBROWS, how I met and came to work for Groucho, and what that extraordinary experience was like!

This is news I’ve been sitting on for quite some time, but now it can be told:

Rob Zombie might seem an odd choice to direct a film version of RAISED EYEBROWS, but that happens to be his favorite book of all time (!) and he is positively passionate about doing justice to it.  Oren Moverman co-wrote the screenplay for the recently released Brian Wilson biopic, “Love & Mercy,” so he is a terrific choice as co-writer on this one and a very skilled screenwriter.  Casting is still to be decided upon, but watch this space for updates.  Meanwhile, here’s Rob & me – the Odd Couple! 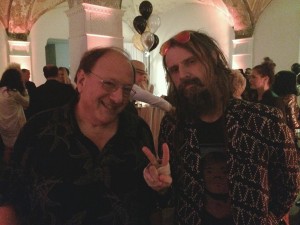